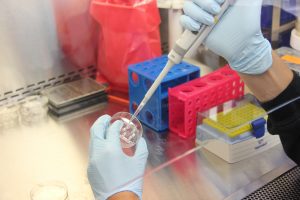 How does a bacteria trick an innate immune system? It uses a mechanism to fight the hosts’ immune response.

Researchers from the University of Maryland (UMD) have discovered how Borrelia Burgdorferi can survive for months within the human body.

Dr. Utpal Pal and his team have done research on Lyme and Borrelia for over a decade at UMD. One of his latest studies revealed that Borrelia has an incredible ability  of creating a protein that dissolves the host’s body immune response to the infection.

Dr. Pal’s theory says that the disease itself is caused by the host’s body reaction to Borrelia. According to him, Borrelia  has a layered defence strategy and it can live within the human body for long periods of time.

Dr. Pal explains that Borrelia is actually producing a protein which has the ability to disable the host’s  body immune response to the infection with the pathogen.

Borrelia is special because unlike other pathogens, it can re-appear weeks or even months after treatment.

In one of his previous studies, Dr. Pal produced the protein marker used to identify this bacterial infection in the body. In his latest research, Dr. Pal was able to isolate the protein created by Borrelia enabling it to put down the host’s first immune response. His study revealed that even in the absence of the protein, the bacteria was capable of surviving the treatment.

The findings of his study will have major implications on the treatment for chronic Lyme disease.

If you’d like to have a more in depth knowledge on this topic, read here.